New York. The Big Apple. Home to many of the modern day costumed superheroes. A city full of X-Men and Fantastic Foursomes and Incredible Hulks. Superheroes had been around in the past, with folks like Captain America and the original Human Torch appearing during the 2nd world war.

Then they seemed to vanish into history, well except for Captain America he was found in ice, and after them came a sudden series of giant monster attacks, such as that giant dragon in China or the furry alien thing that tried to brainwash the world. But they vanished too, most of them having retreated to a place called 'Monster Island.'

Then, as the 60's started, there was a 'spark' and heroes just sprang right back. Reed Richards and his astronaut crew, Professor Xavier and his school for empowered youngsters...

...But with the superheroes came supervillains, the people who wanted to use their gifts for their own good. Some of these guys were sadistic bastards, like the Purple Man, but then there were villains with more tragic circumstances. The guys who saw no other option after getting their powers, or the people who were driven mad by powers they had never asked for. Guys like these, are the focus of our story.
-------------------------------------------------------
The Bar with No Name. The unnoficial hangout for villains throughout New York, the place they could go to grab a drink and chat with their peers. Some would even strike up alliances here, or hire mercenaries or assassins like Taskmaster.

On this particular day, Flint Marko was sitting alone in his usual booth, staring deep into his mug of beer. Another beating from Spider-Man, this time it was after Flint had tried to steal a jewelery box from some wealthy heiress. It was humiliating, some loudmouth kid in red and blue spandex, taking down the freaking Sandman with a vaccuum cleaner. He was pretty lucky the dumbass cop carrying the vaccum around had dropped him and broke the cleaner open, allowing Sandman to escape.

"Rough day Flint?" a voice came. Sandman looked up to see a somewhat portly man taking a seat across from him. He was middle-aged, had pale skin, a brown bowl-cut and wearing a tan trenchcoat over a green and gold outfit, with a pair of black goggles covering his eyes. Otto Octavius, Dr.Octopus. One of the supergeniuses that Spider-Man routinely fought.

"You don't know the half of it Doc...Ugh, goddamn it was so humiliating" Sandman replied, rubbing his temples. Otto gave a small chuckle as his tendrils pulled a cigarette and lighter from his coat pocket, lighting it for him. "Indeed Flint. Of course, some of our friends have had the same misfortune" he replied, referring to a string of defeats the other Spider-rogues had had this week.

"You know Flint, there is an old saying...There's strength in numbers" Otto said, blowing rings of smoke into the ceiling fan. Sandman merely snorted in response "You kiddin' me doc? You forget how bad that Sinister Six thing worked out for us last time we tried it?" he snarked.

Otto smirked and shook his head "Oh no no no, dear Sandman you have me all wrong. I suggest a team-up, of course, but not for revenge against that infernal arachnid." This caused Flint to raise an eyebrow "You see, a common problem that we supervillains have is a...lack of sublety" Otto said, just as his tendrils stubbed his cigarette out onto the nearest ashtray. Flint looked at some of the other villains in the room, seeing Boomerang and Stilt-Man playing pool. "No shit" he replied dryly.

"No need for vulgarities Sandman" Otto scolded "But yes, this is a key flaw I have identified. We are too public with our crimes, too daring and full of bravado. We attract the wrong kinds of attention and that's how we are brought down so quickly, and that is why we suffer from humiliating public defeats" Dr.Octopus explained, leaning as far ver the table as his gut would let him.

"Alright...What exactly are you suggesting?" Sandman asked, now fully intrigued. "Simple" Octavius began, leaning back into his seat with a smirk. He had Sandman now, like putty his hands. "We team up once again. A brand new Sinister Six. But this time we don't focus on killing Spider-Man, oh no, this time will be different" Otto continued. "I say leave the grand gestures for Dr.Doom and Magneto. We work in secrets, using our unique talents to pull off our crimes, under the radar of the arachnid and any of his friends who may get in our way" he concluded.

Now Octavius was silent, awaiting Flint's response. The Sandman continued to mull the offer over. It sounded good on paper, really it did. But 'best laid plans' and all that junk.

After a few minutes of quiet contemnplation, Sandman gave a sigh and stood up from the booth. "Alright Doc. I'm in" Sandman said finally. Octavius gave a satisfied smirk and got up too, tucking his silver tentacles back into his coat "Excellent choice Sandman. You won't be dissapointed with the results" he continued, leading Sandman out of the dingy Bar with No Name, back out into the Big Apple.
_________________ 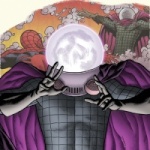