Alright guys, this is an Rp where you must be careful. One of us cannot be trusted, so be careful with your true identity. Now, we have all moved to a new neighborhood. Assume your role!
Btw, we live in a culdesac. The little circle at the end of a drive. So it's only us.
~~~~~~~~~~~~~~~~~~~~~~
Isa smiled as she looked around her new suburban home. She leaned against the kitchen counter and pulled her fleece jacket tighter over her new summer dress. With a sigh, she gazed admirably at the perfect lawn, and down the culdesac.
_________________
MLIA. . . Just walkaway in shame because your not as awesome. . ..

Jenny was sitting at the kitchen counter, trying to figure out the finances needed to support her and her child. She ran a hand through her hair. This was a lot harder than she thought. She looked down at her shirt and noticed some lint on it. She picked it off and stared out of the window. The little circle of houses was endearing.

Dimitri smiled at his wifes peaceful expression. "You like it?" He asked quietly.

Vivian glared at her mother's back as she left the room. She was left in this godforsaken little town when she could be in so many other places! "I HATE YOU!" She screamed at the slut that was her mother. 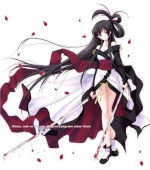 Regina was reclining on the bed in her room. There was nothing to do in this boring neighbourhood. If anything, she wanted to just leave the house and go off. But her mother decided that she should be grounded after the first time. She glared at the ceiling. How much longer do I have to take this? she thought.

Isa turned and smiled at her new husband. "I love it. It's so much better then my old town." Isa reminded herself that she couldn't tell him why she had wanted to marry so quickly and escape. It was a secret only she could know.

Sami watched her daughter with angry and sad eyes. "Well you know what, you'll have to live with it! If you hadn't caused so much damn trouble at our old house, we wouldn't have to move!"

Rose walked down the circular neighborhood, shaking her head at the noise from the Sar's house, and sighing at all the moving vans. She saw a young girl outside and walked closer to her.

Lily walked around her new house idly. She exhaled, blowing the hair from her eyes. Her cousin was coming, and Lily was in charge of straigthening her out. But if they knew her past, they would never trust her.

Peter Johnson came by, as he nods to Lily, kisses her cheeks, and asks,“So how's it going, everyone?” as despite the fact he's stronger than his exotic and foreign beauty of a Playboy Bunny/Super-Model Cousin, he's also more reckless, as well, but not as much as some of his buddies, though.
_________________

Dmitri shly hugged his wife and kissed her cheek.

Peter Johnson sighed, as Mr. Butler and Romulus were in the house, with Romulus smiling, as he said,“How's it going, guys and ghouls?” as Peter said to Romulus,“Apparently it's been 6 months since we all realized that Percival Butler has the hots for Sami Sar, but then again, who wouldn't?” “Aside from me, that is?” as Peter went to shake the group's hands, as he admitted the following words,“Harmonia's on the task of being a Playboy Bunny, everyone, so the best thing we can do, is hope she comes back unscathed and without uninvited guests, for that matter!” as Peter knows that his cousin Harmonia knew what she was doing, as he goes to look out the window, wondering what would everyone be doing in the meantime.

Lily leaned out her window.

"OMG! My new neighbor is being raped by a freaky group of men!"

Isa smiled at ther husband and hugged him.

Sami leaned against her bedroom door and exhaled softly. "I worked so hard so she wouldn't know my past, but she doesn't care."

Jenny looked outside the window again after hearing a scream. "What are they up to now?" In any other circumstances, she would have rushed to that young woman's aid. But she was tired and she knew they were joking around. At least, that was what it was most of the time.

Regina heard the scream but ignored it. Boredom gave her no energy whatsoever. If only her mother would get her her own phone line...

Harmonia was busy being a Waitress who's wearing a Playboy Bunny Suit, which shows off her curves, as she goes to call the phone, during break-time, as she goes to call her scrawny cousin, Peter Johnson, and asks him how he was doing.
When Harmonia found a private place, she went to contact Peter in Greek Language, as she then said to Peter,“Peter, how's the neighbors doing?” as she hopes Peter can pick up the phone.

Peter noticed that his cell phone was ringing, as he then grabbed it, and gets ready to talk to his exotic, foreign-rooted beauty of an elder cousin, as he said in Greek,“They're being peachy when it comes to Percival, Harmonia, so thankfully, we have no idiots in this group!” as Peter recalled that Vlacas means Idiot in Greek, roughly speaking, as Harmonia then sighed, as she said,“Listen, i have to go and continue to work, so you need to remind Percival to take his happy pills, and if that doesn't work...i'll think of something to make him feel better, i promise, Peter!” as Harmonia was worried about everyone else, as she said,“I have to go, and tell everyone i'll be back when my shift is done, alright?” as she ended the call, as she hopes that Peter got her message, in time.
_________________

Tellius Ivory was in the crowd, as he then goes to drink some Frappe, hoping to speak to Amy, as he then said to her,"Good morning, Amy," as he then looked at the crowd, as he admitted,"We're all meeting here, with a possible exception being Harmonia, right, Amy?She's trying to cover our backs by working at a Bar as a Waitress, if i heard right," as he went to look at everyone, seeing as how he knew how to blend in, better than most of the crowd, as he even does a better Job than what Peter Johnson was doing, for that matter, and Peter was competent, in that regard.
_________________